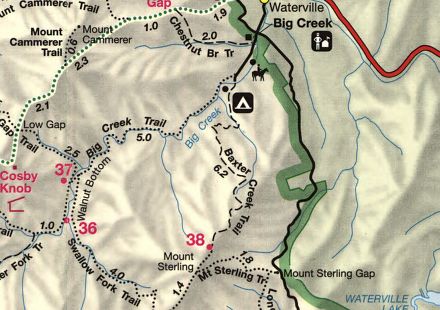 This moderately difficult hike is 5.6 miles roundtrip and includes 2000 feet of elevation gain.

There are several routes that will lead you to the summit of Mt. Sterling. The shortest route to the fire tower is via the Mount Sterling Trail from Mount Sterling Gap.

The Mt. Sterling area is one of the more historic places in the Great Smoky Mountains. According to the early settlers in the area, the mountain was given its name after a two-foot wide streak of lead was found in the bed of the Pigeon River, near the northeastern base of the mountain. Unfortunately those residents mistakenly thought they had found silver.

One of the most famous stories associated with the area occurred during the Civil War. Towards the end of the war the remote valleys around the base of Mt. Sterling became popular hideouts for deserters from both sides of the war. Both Northern and Southern troop detachments would make frequent raids into the area to find and capture these fugitives.

One local legend recounts an incident in which Captain Albert Teague of the Confederate Army captured three deserters: George Grooms, his brother Henry, and Mitchell Caldwell, a man described as being a simpleton. The three captives were forced to march on foot from Big Creek, over Mt. Sterling Gap, and then down to the Cataloochee Turnpike near Indian Grave Branch. Known as a talented fiddle player, Henry Grooms was purportedly ordered to carry his fiddle during the long march. Just before his execution his captors demanded that he play one last tune. He fittingly chose to play "Bonaparte's Retreat," a haunting melody that to this day is still known as "The Grooms Tune" in many parts of the region.

Before their execution Grooms asked if he could pray for a moment. His brother Henry is said to have died cursing the troopers, while Caldwell simply grinned. This so unnerved the captors that they were forced to cover his face with his hat before mustering the strength to shoot him. Teague's unit simply left the three bodies on the side of the road.

Back to the Trail:

Climbing nearly 2000 feet in less than three miles, the ascent to the summit is a bit challenging, however, it's a steady climb and the trail is in fairly good shape. The only real break in the climbing is just prior to reaching the Long Bunk Trail, which forks off to the left in less than a half-mile from the trailhead.

During the early springtime the appropriately named spring beauty carpets the ground along the path. This route also passes through an old growth forest, including several red spruce groves, some of which have trunks that are nearly three feet in diameter.

Once past the junction you'll resume your ascent, and will climb a series of long switchbacks that offer occasional views of Little Cataloochee and the surrounding area.

At roughly 2.3 miles you'll reach the Mount Sterling Ridge Trail junction. Hikers should turn right here and travel for another half-mile to reach the 5842-foot summit.

On a clear day hikers will be able to see Balsam Mountain and Luftee Knob towards the west, Mount Guyot towards the northwest, Max Patch to the east, and the Cataloochee Valley towards the south. If you have a very good eye you may even be able to spot the Mount Cammerer fire tower, which lies due NNW from the mountain.

It was here atop Mount Sterling in 1963 that the balsam woolly adelgid infestation was first noticed in the Great Smoky Mountains. This tiny insect is now responsible for killing most of the park's Fraser firs.

The 60-foot fire tower at the summit was built by the Civilian Conservation Corps in 1935. In the park's early days a lookout spent many hours in the tower, keeping a close eye on the heavily forested terrain of the surrounding mountains. From February 15th to May 15th, and then again from October 15th to December 15th, the tower was manned by lookouts who lived on the premises on two-week tours. When he wasn't at his station the watchman stayed in a small cabin that once stood just north of the tower.

Today the Park Service uses the tower as a radio repeater. The trap door is still open, and if you don't mind a shaky old structure, the views are breathtaking.

According to Peter Barr, author of "Hiking North Carolina's Lookout Towers," the Mt. Sterling lookout has the highest elevation of any true fire tower left standing in the eastern United States In addition to a wealth of historical background on fire towers, his book also serves as a hiking guide to many of the towers in the region.