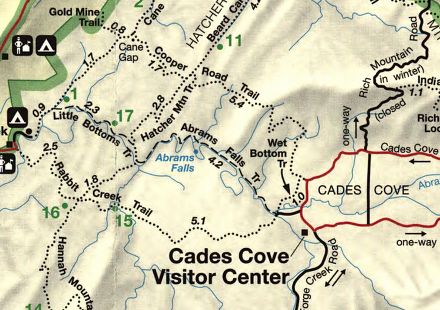 This moderately difficult hike is 5.2 miles roundtrip and includes 675 feet of elevation gain.

The October 2008 issue of Backpacker Magazine listed their top 10 most dangerous hikes in America. The list was developed using casualty statistics as a result of lightning, altitude sickness, extreme weather and drowning, among several other measures.

Many of the trails you would naturally suspect to be on the list were all there, such as the Bright Angel Trail in the Grand Canyon, Mt. Washington in New Hampshire, as well as the Mist Trail, which leads up to Half Dome in Yosemite. However, one trail that caught me by surprise was none other than Abrams Falls. The magazine ranked this pathway as the ninth most dangerous hiking trail in the country, mainly as a result of high exposure to drowning and hypothermia hazards. The article cited 29 deaths on this trail since 1971 as a result of water related accidents.

"All sorts of unknown hazards lie at the bottom of our streams and waterfalls," warned former Great Smoky Mountains National Park spokesman, Bob Miller. The articles states that strong currents beneath the waterfall have swept capable swimmers into hidden traps, while many unsuspecting hikers have fallen into the cold water after slipping on slick rocks.

Needless to say, proper precautions should always be taken while on this trail, especially near the falls. Coincidentally, on our most recent hike, we saw a trail of blood leading from the base of the waterfall, all the way back to the footbridge - a distance of roughly one hundred feet or so. It's pretty safe to assume that someone injured themselves after slipping on the wet rocks surrounding the waterfall.

After crossing the footbridge at the trailhead, hikers should turn left to proceed towards the waterfall. A turn to the right at this junction would lead you over to the Oliver Place.

The path leading from Cades Cove to the waterfall weaves around the ridges that predominate in this area, all the while roughly following Abrams Creek. The route traverses through pine-oak forest along the ridge tops, while passing through rhododendron and hemlock forests closer to the creek. To me, I think this is arguably one of the most scenic forest hikes in the Smokies.

Although much of the trail travels alongside Abrams Creek, the creek is mostly inaccessible due to thick rhododendron growth. If you're lucky, however, you might spot an otter in or near the water. Between 1988 and 1990 park biologists released 133 river otters as part of a successful effort to reintroduce the species within the park. To underscore the historical significance of this project, the Cherokee word for Cades Cove happens to be "Tsiyahi", which means "place of the otter".

At roughly nine-tenths of a mile from the trailhead you'll begin to notice several downed trees alongside the trail. In April of 2011 a massive tornado, categorized as an EF-4 with maximum wind speeds ranging between 165 and 170 miles per hour, and an estimated maximum path width of one mile, ripped through the western end of Cades Cove and downed more than 4500 trees in the area. As a result, the Abrams Falls Trail was closed for a month as crews worked to clear trees blocking the path. In all, more than 33 miles of trails were severely impacted by the tornado. Based on the initial damage reports for this trail I expected to see a lot more downed trees, however, the visible impact along the trail itself is fairly insignificant.

At almost 2.6 miles you'll reach the short side trail that leads to Abrams Falls. Hikers should turn left and cross a footbridge to reach a fairly large "beach" area to admire this beautiful waterfall.

Although Abrams Falls is only 20 feet high, the large volume of water rushing over the sandstone cliff more than makes up for its lack of height. In fact, Abrams Falls is the most voluminous waterfall in the park. Although the broad, deep pool at its base is very picturesque and inviting, swimming here is extremely dangerous due to strong currents and the presence of an undertow.

The 5.2-mile roundtrip hike to Abrams Falls is relatively short, and is considered to be moderate in difficulty, thus helping to attract nearly 1000 visitors per day during peak season, and making it one of the more popular waterfall hikes in the park. As a result, I highly recommend hiking this trail as early in the morning as possible in order to avoid the gridlock in Cades Cove, as well as the crowds along the trail and at the falls. Hiking on a weekday or during the off season is an even better option.

Both the waterfall and the creek are named after a Cherokee Indian chief by the name of Oskuah, who later adopted the name Abram (or Abraham). His village once stood several miles downstream from the waterfall. My new book on the history of hiking has much more information about trail development in the Smokies, as well as other anecdotal stories from the early years of the park. The hike to Abrams Falls in the Great Smoky Mountains begins from the Abrams Falls Trailhead, located at the far western end of Cades Cove. To reach the trailhead drive 4.8 miles along the one-way Cades Cove Loop Road. Just after crossing Abrams Creek turn right onto a gravel road. After driving another four-tenths of a mile through a grassy field you'll reach a large parking area where you'll find signs and a wooden footbridge that mark the trailhead.

Hikers should note that the park closes the Cades Cove Loop Road to motor vehicle traffic on Wednesday and Saturday mornings until 10:00 a.m., between early May and late September of each year, to allow cyclists and pedestrians to enjoy the cove.